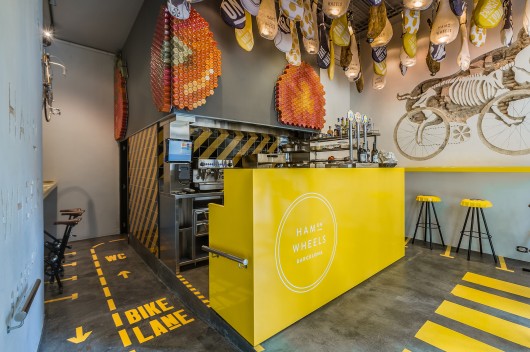 From the architect. What if we combine the best Spanish ham, the best Catalan ‘Coca’ bread and bicycle culture?

We get ham on wheels, premium Catalan fast food within a tiny urban space full of color, aromas and flavors.

The project decomposes the basic ‘ingredients’ of the concept reassembling them into a new spatial experience:

1. The best ham is made by happy pigs. Happy animals who roam freely in their natural habitats. We like to imagine them riding free around Barcelona. This naïve vision is sculpted on to the wall, producing a textured mural.

2. Road markings invade the floor. A signage system that orients the users, provoking a relation between pavement, program and furniture such as the bike stools parked along the walls.

3. The ham becomes an iconic element that when repeated, produces a luminous landscape ceiling. The hanging Hams differ in color, graphics and display messages such as: Moritz, Barcelona’s Best Beer, Take Away, Fast food.

4. The tomato usually rubbed overbread for preparing the ‘Pa amb tomàquet’, is another gastronomic protagonist of the Catalan cuisine and in particular for Ham on Wheels. Hence, tomatoes are highlighted within the space through a large mosaic made up of hexagonal jars traditionally used in Spain for storing tomatoes.

Ham on Wheels / External Reference Architects originally appeared on ArchDaily, the most visited architecture website on 05 May 2015.