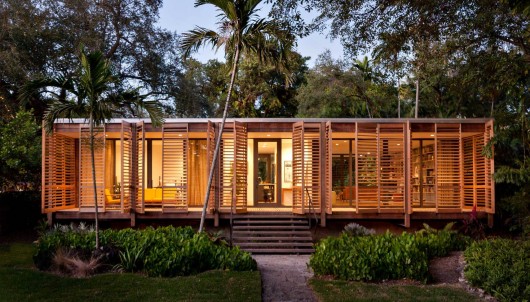 From the architect. LIVING IN THE LANDSCAPE
This 1,500 sf house, which draws upon the American glass pavilion typology, Dog Trot, and principles of Florida Modernism, provides a tropical refuge in Downtown Miami. Elevated 5′ off the ground, the house includes 100 feet of uninterrupted glass – 50 feet spanning the length of the front and rear facades, with four sets of sliding glass doors that allow the house to be entirely open when desired. The house includes 800 sf of outdoor living space, with front and back porches and shuttered doors along the front for added privacy and protection against the elements. These details, and the position of the house, which is at the center of a 330-foot long lot, allow the house to meld seamlessly with the site’s dense and lush native landscaping.

As owners, architects and general contractors, we physically built most of the house ourselves. Tectonics, materiality and the logic of construction became of primary interest. In a part of the country where concrete is the primary construction material, we opted for a more sustainable steel and glass superstructure, explored a combination of wood finishes, and made continued investigations into construction assemblies and innovations.

DESIGN CONCEPTS
The design for our house relies on a back-to-the-basics approach – specifically studying old architectural models that care about good form but are also good for something. Each design decision was organized around four central questions that challenge the culture for building big: what is necessary; how can we minimize our impact on the earth; how do we respect the context of the neighborhood; and what can we really build?

OLD MODELS FOR FUTURE BUILDINGS
Dog Trot
Some answers came from a place with which we are already intimately familiar – the seemingly forgotten American Vernacular, and more specifically, the Dog Trot, which for well over a century, has been a dominant image representing Florida Cracker architecture. The small, simple, and practical building is both modest and rich in cultural meaning. It attempts to maximize efficiency, space, and energy; relies on vernacular building materials; and celebrates the balmy breezes.

The Glass Pavilion Typology and Tropical Modernism
The glass pavilion typology and the principles of Tropical Modernism also provided direction. Thanks to a booming concrete industry in Miami’s backyard, Miami-Dade County has developed an almost relentless adherence to building in concrete, such that the idea of building in anything else would seem absurd. There is an unfounded, albeit pervasive, belief that the costs associated with building a residential project in steel and glass would be exorbitant; that there isn’t enough skilled labor on hand to build such projects, and so on. Ironically, we have old models from South Florida’s Tropical Modernists – dating back to the 1950s and ‘60s – of structures made of concrete, wood, steel, and hybrid systems. Simple, rational, efficient, cost-effective buildings that celebrate the tropics, these designs lend feasible and innovative alternatives for Miami’s future buildings.

South Florida’s postwar architects – such as Alfred Browning Parker, Rufis Nims, Robert Bradford Browne, Mark Hampton, Paul Rudolf and Ralph Twitchell, William Morgan, Donald Singer, Gene Leedy, and others – gave birth to a tropical modern school of thought and developed their own regional interpretations of the International Style by turning to local landscape, climate and materials to inform their designs. In an era of optimism and experimentation, these architects married building traditions with passive systems, new technologies, and innovative construction techniques. Emphasis on construction methodology was central to their work and became a model for sustainable design in the tropics.

As part of our research, we analyzed the original construction documents from four residences built during South Florida’s Post-war period. First diagramming the design intent, we then made newly constructed axonometrics (shown above, left) that break down the material selections and systematic (architectonic) assemblies. As models, these four projects display an incredible range of materials and building systems. As a visual tool-kit, they served as a tremendous resource for us on this project.

CONSTRUCTION AND DETAILS
Steel and Glass Superstructure
Harking back to the optimism and experimentation of South Florida’s postwar architecture, we sought an alternative to the use of concrete and concrete only, instead exploring steel and glass as the superstructure. As a result, we wasted fewer materials, simplified the assembly, and reduced the cost and time of construction, all the while allowing for increased cross ventilation and a heightened sense of living within the landscape.

Glass and Insulation
With today’s advances in thermal qualities of glass and insulation we were able to use the Tropical modern concepts alongside current Florida Building Code requirements. To meet and/or exceed the required R-Values, we included insulation on all six sides (icynene and rigid insulation); as well as 9/16″ thick thermal glass. We also had to design new assemblies in the process. For one, the new code just came out with requirements to insulate the floor if elevated. As this is a new requirement — we had to develop an entirely new floor detail – creating a sandwich with plywood underneath and on top of a layer of rigid insulation. Meanwhile, in order to achieve the R-Value on the roof and accommodate a slight slope, we designed a similar but inverse concept – installing tapered rigid insulation on the roof, with a layer of plywood underneath followed by icynine below. (The R-value is a measure of thermal resistance used in the building and construction industry. It is expressed as the thickness of the material divided by the thermal conductivity. The higher thenumber, the better the building insulation’s effectiveness. The design for the roof insulation resulted in a R-Value that exceeded what was required.)