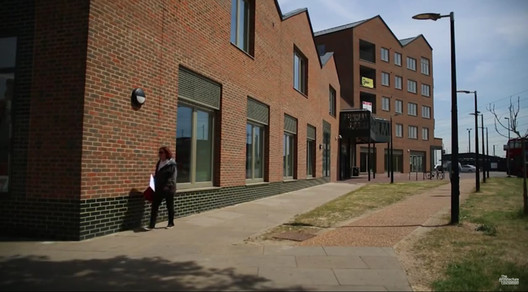 For the past century or so, the key to turning around the fortunes of a community was thought to be simple: large scale, infrastructural overhaul was capable of rethinking a place from the ground up, fixing any problems. The deficiencies with this sort of thinking are now well known, and in recent years small, surgical interventions which preserve the existing qualities of a town have gained traction. But how do you create large-scale change with such small-scale proposals?

The town of Rainham, at the far Eastern reaches of London, might hold an answer. Having preserved its village-like atmosphere despite being part of London’s industrial hinterlands, since the turn of the millennium Rainham has been the subject of a series of small developments that have made a big overall change. Projects by Alison Brooks Architects, Maccreanor Lavington, Peter Beard LANDROOM, Studio Weave, Civic, and East have improved key spaces within Rainham while connecting it to the Thames and the nearby marshes – all by being respectful of the town’s existing qualities and responsive to each others’ interventions.

In this video, the second released by The Architecture Foundation in connection with Doughnut: The Outer London Festival, the designers behind these interventions discuss Rainham and its dramatic yet gentle transformation. Taking place on September 5th, Doughnut seeks to take the focus away from the center of London and instead present “an adventurous celebration of all things Outer London and a critical reflection on the rapid transformation that the city’s periphery is currently experiencing.” Find out more about the festival here.