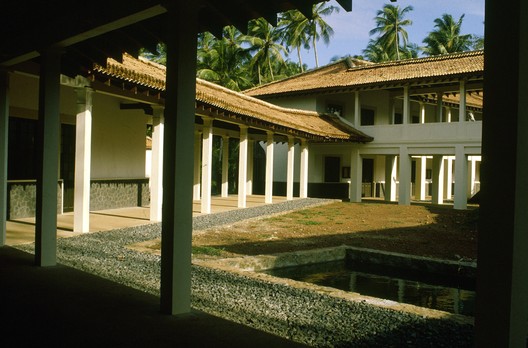 Despite his late entry into architecture, Geoffrey Manning Bawa FRIBA, (July 23, 1919-May 27, 2003), explored modernism and its cultural implications, and created a unique, recognizable style of design which had a lasting impact on architects across the world. Well versed in Modernist theory, Bawa was one of the original proponents of Tropical Modernism, a design movement in which sensitivity for local context combines with form-making principles of modernism. Bawa’s architecture led to the formation of a new architectural identity and aesthetic for many tropical environments, and won him recognition and awards, including the Chairman’s Award of the Aga Kahn Special Chairman’s Award for Architecture (2001) and the title Deshamanya, in recognition by the government of Sri Lanka for his contributions to his country.

Bawa was born in Ceylon (which would become Sri Lanka in 1972), and began his professional career in the legal field after studying at St. Catharine’s College, Cambridge. He worked in in law in England for several years, but left to travel the world after the death of his mother. In 1948, Bawa purchased the Lunuganga rubber plantation, and developed an interest in gardening and architectural design.

Bawa had a strong desire to design, and apprenticed himself to HH Reid, an architecture firm in Colombo, Ceylon. Filled with aspirations higher than apprenticeship, Bawa studied at the Architectural Association, and graduated in 1957, at 38 years old. When he returned home, Bawa became a partner at Edwards, Reid, and Begg, and took over the practice shortly thereafter.

In his practice, Bawa tried to achieve what The Guardian called “a new, vital – and yet essentially Sri Lankan – architecture.” [1] Bawa’s search for a way to combine the traditional and the modern attracted the attention of other artists and architects, most notably Ulrik Plesner, who worked with Bawa from 1961 to 1967.

Even in his early work, Bawa’s buildings had a Tropical Modernist flair. In the Ena de Silva House (1960), he combined the Modernist tendencies for open floor plans and stark decoration with iconic elements of Colombo manor houses. Similarly, the Batujimbar Estate (1973) adapts modernist principles to local Bali traditions. Bawa’s ideas continued over a variety of projects; in particular, his designs for hotels were embraced for their ability to create location-specific housing, which at the time was a dramatic departure from the trend of designing hotels to fit anywhere in the world. In the Bentota Beach Hotel (1970), Bawa created a resort that referenced its surroundings while allowing for a modern lifestyle.

After the social and governmental changes of the 60s and 70s that ultimately led Ceylon to become Sri Lanka, Bawa received commissions for even larger projects. Bawa’s design for the Sri Lanka Parliament Building (1982) was a continuation of the investigations he began earlier in his career; it uses pitched roofs and other examples of elements from local architecture to embody the government’s lineage. At the time, the Parliament building was the largest of Bawa’s projects, and brought even more international attention to his approach. Around this time, Bawa designed several new buildings for the University of Ruhuna (1988). His use of traditional building materials and architectural elements adapted to the local climate proved to be useful, as it helped keep costs down in addition to referencing local context.

Bawa closed his firm when he was seventy years old, but did not stop practicing architecture. Much of his work from these later years was conceptual, and he also produced some of the most interesting built projects of his career during this period. The Kandalama Hotel (1991) and the Blue Water Hotel (1997) represent a slightly more minimalistic approach to his architectural design informed by his earlier work.

Find out more about Bawa’s architecture via the link below.

Except where otherwise marked, the drawings and photographs in this article are courtesy of the Geoffrey Bawa Trust Fund, from David Robson, or from the collection of Harry Sowden.